Notes on some of those mentioned in the Great Waltham pedigree, with a link to the Wiles pedigree.

Appears to have been a member of the 3rd Foot, although his service record has not yet been located. He is mentioned in the Medical Recorder for 1825. He was admitted to a hospital on 26 July 1822, having been suffering from an eye infection since the previous December. At his regimental hospital he had been bled, cupped, leeched, blistered, had a seton (piece of cotton, silk or rubber) placed in his neck and used various eye drops and bluestone (copper sulphate): all of these treatments had proved ineffective. He was at this time treated with silver nitrate eye drops (not something that would be used now) and was discharged with both eyes "quite well" on 19 September.

A labourer, joined the 49th Regiment of foot on 18 September 1819. His service record is TNA, reference WO 97/629/119. Initially a Private, he was promoted to Corporal on 25 March 1824, then to Sergeant on 17 April 1827. He served 6 years and 7 months at the Cape of Good Hope and 9 years 8 months in the East Indies. He was discharged at the end of September 1839 after a total of 20 years 14 days. The cause of his discharge was illness: chronic dysentery, which had rendered him "very feeble & extremely emaciated". This was adjudged to have been "contracted in the Service without being attributable to Design, Vice or Intemperance", his character being described as "Extremely Good". At the time of his discharge he was 5' 8¾" tall, with dark hair and eyes and of fair complexion.

He appears in the 1841 census working as a watchman in the Old Gaol and House of Correction at Chelmsford.

A labourer, died accidentally on 20 September 1880, as reported in the Chelmsford Chronicle the following Friday (24th):

GREAT LEIGHS.—Death through Riding on Shafts.—On Monday afternoon a labourer named Alefounder, employed by Mr. Arnold, of Great Leighs, was returning home from Chelmsford with a load of coal, standing on the shafts. When near Chatham-green he fell and the two wheels passed over his body. He died at 11 o'clock the same night. He previously explained how the accident happened, and an inquest was therefore not deemed necessary. 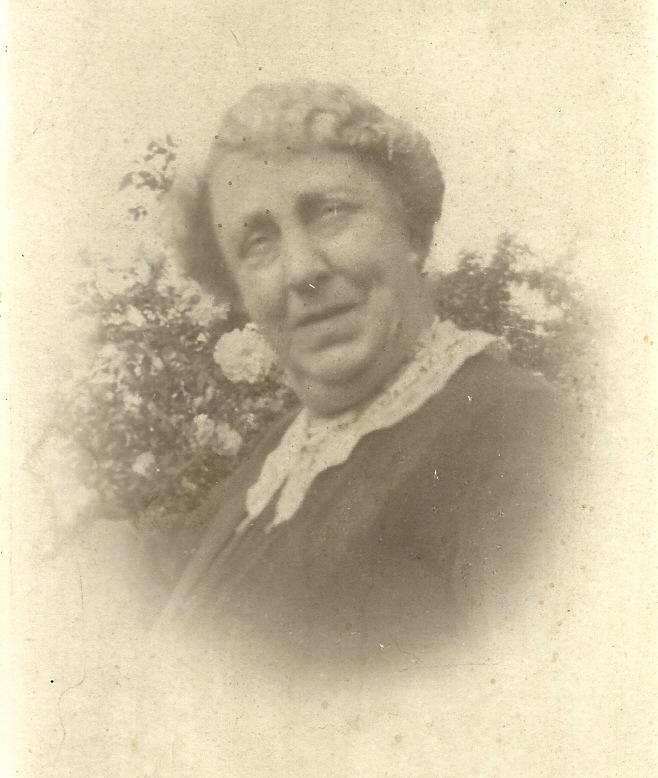 Married Thomas Parmenter in 1880. I am grateful to Peter Wynn for the photograph on the left. Click on the picture to enlarge.

World War I pension records show two periods of service in the Essex Regiment, although the details of only the second appear in this set of documents. His first period of service was with the 1st Essex Regiment, he being discharged on the termination of his period of engagement. On 29 Sep 1914, he re-enlisted at Stratford in the Army Reserve, for one year, giving his address as 4 Plough Lane, Homerton. He was discharged at Warley on 3 Aug 1916 as no longer being physically fit, having actually served for 1 year 310 days. The record of his "Campaigns, Medals and decorations" says: Home 29.9.14 to 3.8.16 and Egyptian 1884-5 & Khedive Star. The latter was presumably for one or more of the operations known as The Nile (Wolseley's expedition to Khartoum to rescue General Gordon), Abu Klea, Kirbekan, Suakin and Tofrek.

Son of the above, worked as a carman. Joined the 16th Battalion of the Royal Fusiliers on 19 Jan 1915, but was discharged on 22 May 1915 on medical grounds, being declared "quite unfit to be a soldier". No more precise details appear in the pension records. He was awarded a gratuity of £15.

A prankster, it appears: something that got him into trouble. The Newsman 7 Dec 1901:

Albt. Alefounder and James Brown, labourers, of Great Leighs, pleaded guilty to damaging a gate, the property of Mr. A. Riley, to the extent of 3s.—P.s. Collings stated that on one and the same night ten different gates were taken off their hinges within a quarter of a mile. One gate was pitched into a ditch, and another was placed against the posts, so that a labourer going to work early next morning, in climbing over the gate, fell, severely injuring his back and wrist. — The Chairman: It is a very dangerous game—Alefounder: I might a'done a lot "wus."—The Chairman: Brown, this is not the first time you have been here. You will be fined 30s., with the 3s. damage, and 5s. costs. Alefounder will be fined 20s. and 5s. costs.—Alefounder: Time to pay guv'nor? Don't be hard!—Time was refused, and the defendants paid, Alefounder remarking, after paying, "Now I've got five bob to have a wet, gore love-a-duck." [Laughter.]

He later found himself on the other side of the Law. He is mentioned in the book, Echoes of the Great War: The Diary of the Reverend Andrew Clark, 1914-19 (Clark, 1985), where he is called 'Alix' Alefounder. "Snippets" are available from Google Books, and from these it is clear that he made hurdles – temporary fencing for sheep. He was therefore a vital part of the local economy, there being no other hurdle makers in the vicinity. According to Clark (1985), this fact was used by a certain Mr T. Stoddart in an attempt to have him excused military service in World War I. What he should have done was to use a reason of far more relevance to the military authorities: 'Alix' Alefounder suffered from asthma, and was eventually classed as unfit on 31 May 1917. According to a memorial board in the Essex Police museum, a certain A. Alefounder was appointed as a Special Constable at Great and Little Leighs during the Great War. There appears to have been no-one else this could have been other than Albert Edward Alefounder.

An obituary and account of the funeral of Frederick James Wiles of Bankside, Braintree, appeared in the Chelmsford Chronicle on 30th August 1940. He died on the 25th August, aged 78. "Mr. Wiles, who was a native of Colchester, was formerly with the legal firm of Messrs. F. P. Bawtree and Sons, Witham. He came to Braintree 46 years ago to enter the legal office of the late Mr. Fred. Smoothy, and upon the death of Mr. Smoothy he became managing clerk to Messrs. Smoothy and Hills, who succeeded to Mr. Smoothy's practice. Following the death of Mr. Edward Holmes the practices were amalgamated as Messrs. Holmes and Hills, and Mr. Wiles became the managing clerk. He also succeeded the late Mr. Smoothy as Superintendant Registrar for Births, Marriages and Deaths for the Braintree Union. Mr. Wiles also became clerk to the Braintree Joint Hospital Board. He retired in 1935, having completed 41 years' service as managing clerk in three successive Braintree legal practices. During his active years in these offices Mr. Wiles gained the confidence of a large clientele, which extended over a wide area. Mr. Wiles was a Past Master of St. Mary Lodge of Freemasons, having passed through the chair in 1915, and he served as churchwarden of St. Michael's Church. He was twice married, and leaves a widow but no children." The list of mourners at the funeral begins: " Mrs. Wiles, widow; Miss Cook (Colchester), niece; Mr. and Mrs. J. Alefounder (Chelmsford), step-son and step-daughter; Master J. Alefounder," and includes Miss Martin and Mr. F. Martin.

The question arose as to how a Mr. & Mrs. Alefounder came to be step-children of Mr. Wiles. It appeared that they were Frederick John Alefounder and his wife Ethel née Martin. A search of the 1911 census showed Ethel Martin, age 8, living with Charles William Pyle and his wife Rose, described as his "Grandchild". Given that Charles Pyle was aged 28 and his wife 30, this seems unlikely. They had been married for 6 years. It was Rose Pyle who completed the census form. It would be understandable if she did not want to confess to having had an illegitimate child, but "step-daughter" could merely imply an earlier marriage – and would have been an accurate description. Investigating this revealed three marriages for Rose Martin, to Charles William Pyle, Joseph T. Collins, and finally to Frederick James Wiles, who therefore became step-father to her daughter Ethel.