General information can be found on the Yards and Courts of Old Norwich web site. According to this, Alefounder's Yard was situated between 77 and 95 Lower Westwick Street in the parish of St Swithin. The earliest reference given there is to the 1851 census.

In Kelly's Directory of Norfolk 1896, Alefounders Yard can be found in Westwick Street between numbers 79 and 85. John Alefounder, a gardener, and Leah Alefounder can be found in the 1841 census living in Alefounder's Yard. John and his wife Leah are mentioned in the will of William Alefounder, gardener, proved in 1823. He left them and their heirs, in trust, his four houses in St Swithin and St Benedicts in Norwich.

I am grateful to Jackie Murrell for initially finding Alefounder's Yard in the 1841 census.

8 dwellings are listed: as John and Leah were only left 4 houses in St Swithin and St Benedict, presumably not all of these 8 were owned by them at this time.

It is not at all clear why only two residences are listed in the census, but that is all there is.

10 residences listed here; the original clearly has double lines between them and check marks for that number of inhabited houses.

7 dwellings inhabited, plus one uninhabited.

5 residences at this time, but now we have house numbers and it is clear that there used to be 8, numbers 1, 2 and 3 having disappeared. The odd order of numbers suggests a change to the entrance position of the yard.

Kelly's Directory of Norfolk, 1912, mentions Alefounder's Yard, but lists none of the residents. However, residents are listed in later directories, and it appears that there were eight dwellings in Alefounder's Yard at this time. 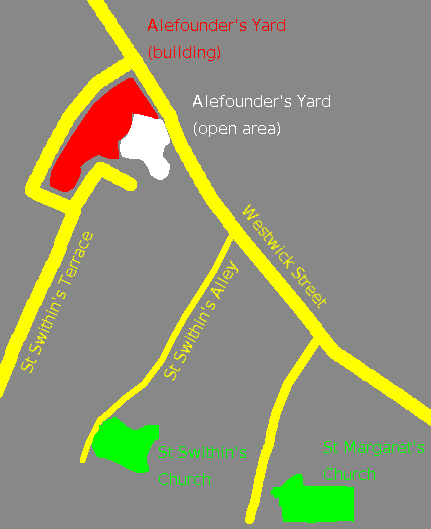 Alefounder's Yard is certainly no longer in existence. Even the road layout in that part of the south side of Westwick Street has changed, as can be seen by comparing a modern map or satellite image (available via Google Maps) with the first Ordnance Survey map (compiled between 1879 and 1886). The Ordnance Survey map can be seen on the Norfolk County Council E-Map Explorer web site (grid reference 622566E 308942N), along with aeriel photographs taken in 1946 and 1988. The sketch map on the right corresponds with the Ordnance Survey map, and shows where I think Alefounder's Yard was situated, the white area being open space and the red area, or part of it, being the residential building.

The buildings visible on the 1946 photograph do not correspond with those on the Ordnance Survey map. The available evidence suggests that Alefounder's Yard was demolished some time between 1931 and 1941. The 1988 photograph matches modern maps and the satellite image.

I am grateful to John Pepperdine and Rosemary Oliver (waterland@one-name.org), both members of the Guild of One-Name Studies, for information concerning Alefounder's Yard.