Notes on some of those mentioned in the Shoreditch pedigree. Much of the information to construct this pedigree has come from Graham Hoadly and I am grateful for his help with this. On his web site, www.hoadly.com, can be found more details, both concerning those mentioned here and about numerous relatives that I have not included. I am also happy to acknowledge the assistance of the late Mr. R.T. Alefounder of Colchester. 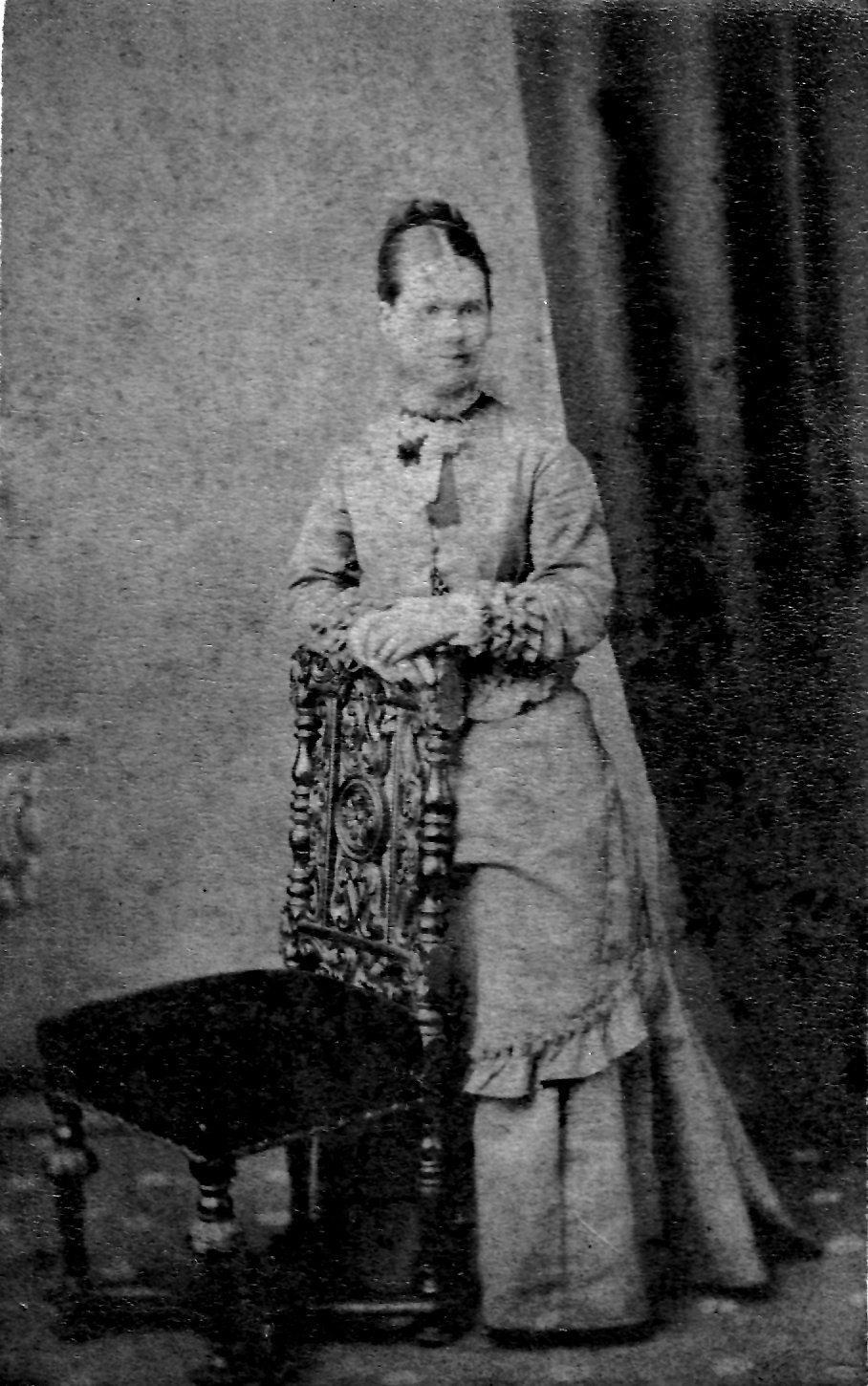 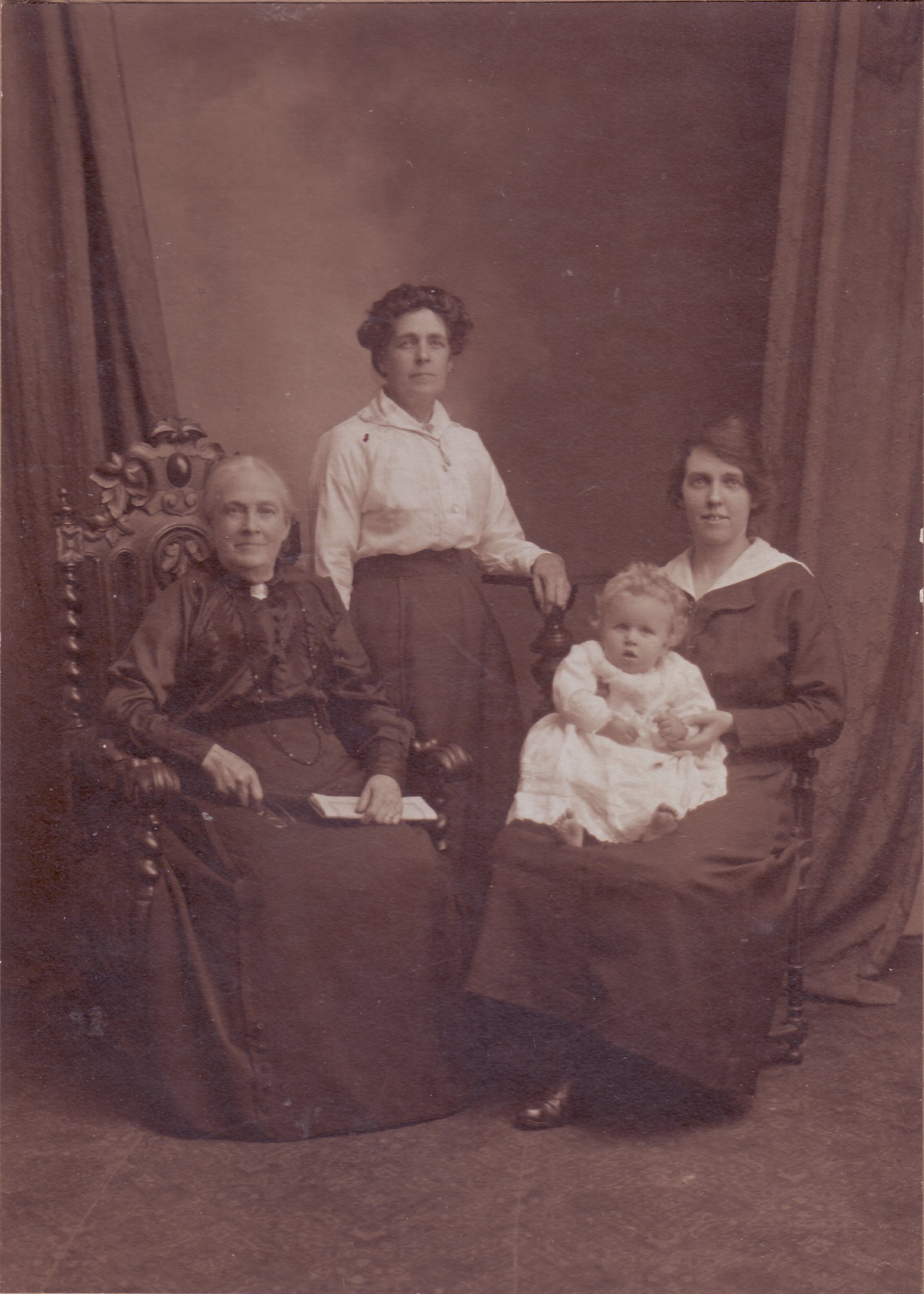 On the left, a photograph of Susannah Gregory née Alefounder presumably taken in the 1860s or 1870s. On the right, Susannah with her daughter Annie Emily Bletcher née Gregory, granddaughter Annie Florence Day and great-grandson, Harry Day, this picture being dated 21 September 1917. Click on pictures to enlarge. Photo credits: Graham Hoadly. 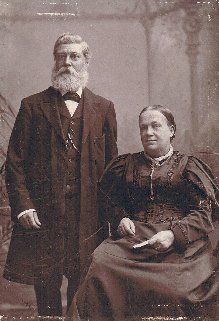 On the left, Thomas Harvey Cooper and his wife Harriett née Alefounder, in the 1890s.

The picture on the right is part of a group photograph taken at the wedding of James E Kelly and Eileen Clara Kelly in 1919. Five of Thomas and Harriett's children can also be identified in the group: Ernest Cooper, Edith Helen Cooper, Catherine Lilian Whitehead, Harriett Clara Kelly, Lois Rebecca Picton and a granddaughter, Nelly Maud Jaques. These all appear below.

My thanks to Graham Hoadly for the original photographs. 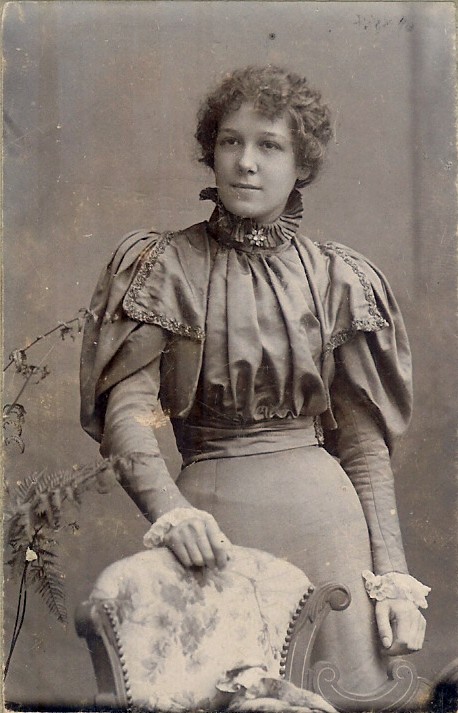 Lois Rebecca Cooper, another daughter of Thomas Cooper and Harriett Alefounder, in the 1900s. By the time of the group photograph from which the small picture above is taken, she had married Joseph Picton. 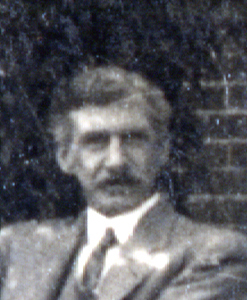 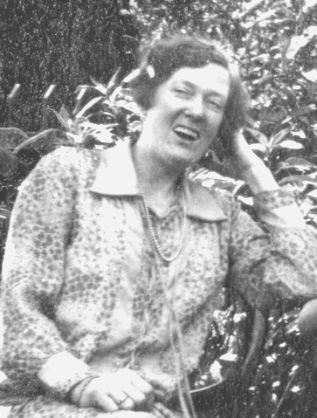 Harriett Wood is the nearest one to the front of the charabanc with her arm over the side.

Initially a harness maker, he joined the 7th Brigade of the Royal Regiment of Artillery on 15 February 1871. He was described as 5 feet 8½ inches tall, 134 lbs, of fair complexion, with blue eyes, brown hair and no marks or scars.

It appears that he deserted on 22nd May 1872, and rejoined on 7th April 1873. He was tried for desertion on 15th April and imprisoned until 30 September that year. He continued service as a Gunner until his discharge on 25th June 1878. During his service, he suffered various infections resulting in hospital treatment, and was eventually declared unfit for further service as a result of bronchitis. This started in July 1877 while he was stationed in Gibraltar and was said to be the result of cold. The medical report said "He is weak, has a constant cough with difficulty of breathing. Will probably be permanent & prevent his contributing to his own support." He had served a total of 3 years and 187 days in Gibraltar.

At the Regimental Board meeting held into the cause of his discharge, he was found to be of good character (in spite of his name appearing three times in the Regimental Defaulters Book and having been tried by Court Martial for desertion), with one good conduct badge and a fourth class school certificate. He was intending to live at 7 Bridgwater Gardens, Cripplegate, London after discharge.

He returned to his previous occupation of leatherworking, although more often recorded as a football maker rather than a harness maker.

One might almost think that Ernest Charles Alefounder wanted to confuse future genealogists by giving misleading information to census enumerators. He and his family appear in census returns as follows:

Of course, there can be no absolute certainty that I have the correct family for the 1881 census, but considering the information I have concerning the Alefounder families living at that time, I am fairly confident that my identification is correct.

A house decorator, joined the 14th Hussars on 22 August 1898 at the age of 19 years and 2 months, having previously been in the Essex Regiment. He was described as being 5 feet 5 7/8 inches tall, 123 lbs, of fresh complexion, with grey eyes, brown hair and scars on his nose, chin and third finger of his right hand.

He served as a private until 20th September 1898, when he was transferred to the 1st Battalion Essex Regiment, and was discharged on the 10th October that year "At his own request on payment of £10 under Art. 1141 Royal Warrant 1897", having served for a total of 50 days.

Employed as a lorry driver for Morgan & Co. before World War I, living at 15 Brooksby Walk, Homerton, London. Joined the Royal Army Service Corps as a private on 5 July 1915 and saw service in Egypt, the Dardanelles, Serbia and Salonika. Following his return to England on medical grounds (arriving 5 May 1916), he was transferred to the RMT Repair Depot, Battersea. He remained there until the end of the war, being promoted to Corporal on 27 Feb 1918 and Sergeant on 6 Dec 1918. His final transfer to the reserve was on 18 Mar 1919.

Minnie Elizabeth Alefounder seems to have taken an interest in teaching from an early age – her occupation at age 14 was Pupil Teacher (1901 census). Her Teachers Registration Council certificate gives her date of registration as 1st May 1916 (reg. no. 16138) and says that she was trained at Moorfields L.C.C. Training College, E.C. It lists her attainments as Board of Education Certificate, University of London Diplomas in History and English and Gilchrist Medal. Her teaching experience:

Her professional address is given as Addison Gardens Junior Girls' School; the certificate does not say when she ceased to work there. Her home address, from various telephone directories spanning 1945-1963, was 20 Priory Way, Harrow.