Notes on some of those mentioned in the Suffolk pedigree. There are links there to other family trees: Petts, Turner, Grey, Lawrence, Sharpe and Crawford & Hall.

It is not clear why the birth place for George and his brother Charles is given as Bury St Edmunds in the 1851 census. I have no evidence for an Alefounder family there at that time, and I can only suppose that Bury St Edmunds was the nearest "big place" that the enumerator had heard of. In the 1861 census, George's place of birth is given as Norfolk Stoke, but the Norfolk comes from a "do" (ditto) referring to the previous line. This could well be a mistake for Suffolk. The place of birth for Charles, no longer living with his brother, was given as Stoke Suffolk.

The 1851 census was in 30/31 March. On 27 November that year, Charles Alefounder made his will, giving his address as St. Ann's Road Kennington Surrey; presumably he moved there at or around the time of his marriage in July. He soon took over the "Coach & Horses" at 9 Dorset Street, Lambeth, his address as given in the 1861 census, where he was found to be giving short measure. Lloyd's Weekly London Newspaper, 10 November 1861:

FALSE WEIGHTS AND MEASURES
At the petty sessions, held on Wednesday last, at Newington, before J. Tilson, Esq., and a full bench of magistrates, 22 persons were summoned for having in their possession unjust scales, weights, and measures. They comprised 7 licensed victuallers, 6 beer retailers, 7 grocers and chandlers, 1 baker and 1 butcher, carrying on business in the neighbourhood of Clapham, Balham-hill, Brixton, &c., upon whom fines were inflicted, as follows:
…
Charles Alefounder, beer retailer, Dorset-street, Clapham-road, one measure. Fined 5s.
…

Shown as living in Church Lane, Bocking at the time of the 1851 census, but by 1861, in Bradford Street. The 1871 census gives this more specifically as Woolpack Lane. In fact, he was living at Woolpack Lane by 1855. The Essex Standard, and General Advertiser for the Eastern Counties, 13 April 1855:

BRAINTREE AND BOCKING
Serious accident.—On Tuesday morning a journeyman bricklayer named William Alefounder, in the employ of Mr. Parmenter, of Bocking, the contractor for the restoration works of Braintree church, while engaged in plastering the side wall of the south chancel aisle, the support to the scaffold boards broke and he fell to the floor, fracturing his right leg a little above the ankle. Assistance was soon afforded, and he was conveyed to his residence at Bocking, where he was promptly attended by Mr. John Harrison, surgeon.

Enlisted in the Royal Marines on 25 December 1845, being then a farm labourer aged 20 years and 3 months. He received a bounty of £3 17s 6d. His description is given in TNA ref. ADM 157/41/5: height 5' 8", complexion fresh, eyes hazel, hair dark brown and with no distinctive marks. In the 1851 census, he was a patient in Ward No. 12, Melville Hospital, Chatham. The file includes a record of the ships on which he served:

He was discharged as an invalid on 17 April 1860 and appears to have died later that year. One notable event during his period of service was the Crimean War, 1854-1856. HMS London was involved in the campaign, and in TNA ref. ADM171/27 fo 57r is found the record of him being awarded the Crimea Medal on board that ship. 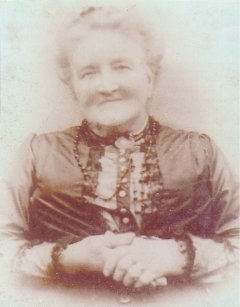 Her birth was registered in 1843, but according to the record of her baptism (19th January 1862), she was born on 26th August 1842. She was one of the illegitimate children of Maria Alefounder of Cavendish, Suffolk. Maria appears in the 1841 census in Sudbury Union workhouse, and in 1851 living with her mother in Cavendish. She married Joseph Brockwell in 1856.

I have not found Amelia in any census returns before her marriage to Henry Frederick Turner in 1866. Apart from the belated civil birth registration, the earliest mention of her is the 1862 baptism at the age of 21, by which time she was living at St Ann's Road, Kensington. At that time she mentioned her mother, Maria, single woman of Cavendish: undoubtedly, this is more to be relied upon than the fictional William Alefounder, labourer, that she named as her father when she married Henry Turner. Henry Turner appears in a separate family tree. Photographs of her children and grandchildren can be found here.

In 1866, William Alefounder was employed in a cocoa fibre mat factory owned by Thomas Churchyard of Melford. The factory was destroyed by fire on Friday 27th April, resulting in the death of two of the employees. A lengthy account (left) of the fire and inquest appeared in the Bury Free Press on 5th May. In his statement to the inquest, William Alefounder said the fire started in fibre spread out to dry in the yard. He raised the alarm and shut a door in an attempt to prevent the fire entering the factory, but flames came underneath through a crevice. His attempts to stamp out the flames having failed, he escaped via a back window.

He is recorded in the 1861 and 1871 census returns, but has not been found in any later census. The first and only clue as to what happened to him after appearing as a hair weaver living with his parents in 1871 is found in the record of an inquest into the death of John Lyons in 1885, who was discovered lying in the street having fallen from the first floor window of a house of ill repute in Portsea, Hampshire. Private James Alefounder of the Sussex Regiment was discovered running away from the scene; I know of no other James Alefounder that this might have been. Lengthy reports of the inquest appeared in the local press, transcribed here.

Joined the Royal Artillery on 4th November 1891, at the age of 18 years 5 months, having previously been a Coster. He was described as being 5 ft 11 inches tall, 150 lbs, eyes blue, hair dark brown.

Records at the National Archives give details of his service, initially as a Gunner, no. 87316: His service was reckoned as follows:

Total service counted for his pension was 11 years 303 days.

He was involved in the North-West Frontier Local Expedition campaign 1897-98, and was awarded the India Medal of 1895 with clasps for Tirah 1897-98 and Punjab 1897-98. His next of kin was stated to be his mother, Amelia Ward, of 71 Carlton St., Battersea, London, from which it is clear that she remarried following the death of his father. 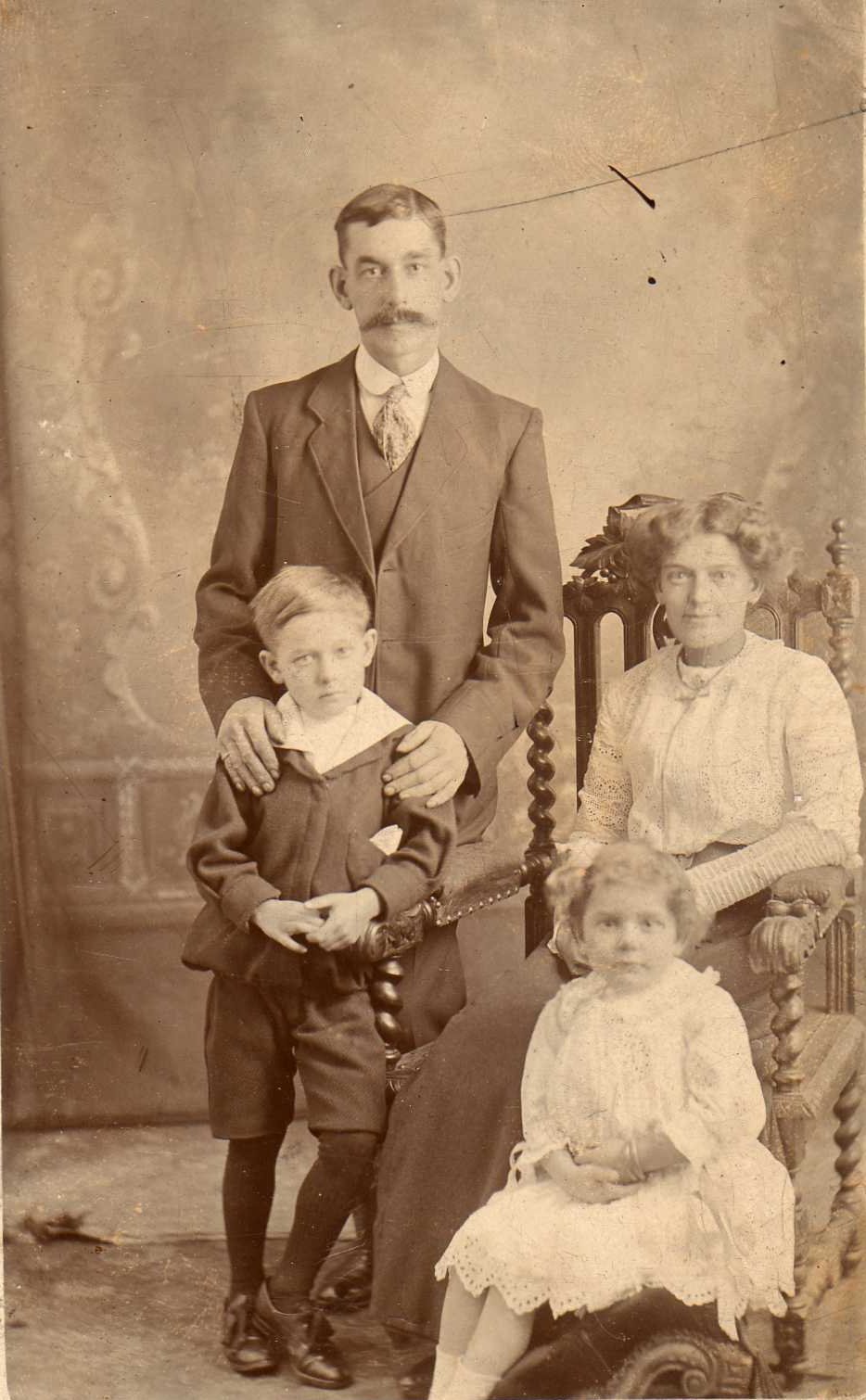 Arthur Daniel Alefounder, his wife Eleanor née Sharpe and their children, Arthur George and Eleanor May, in 1913. 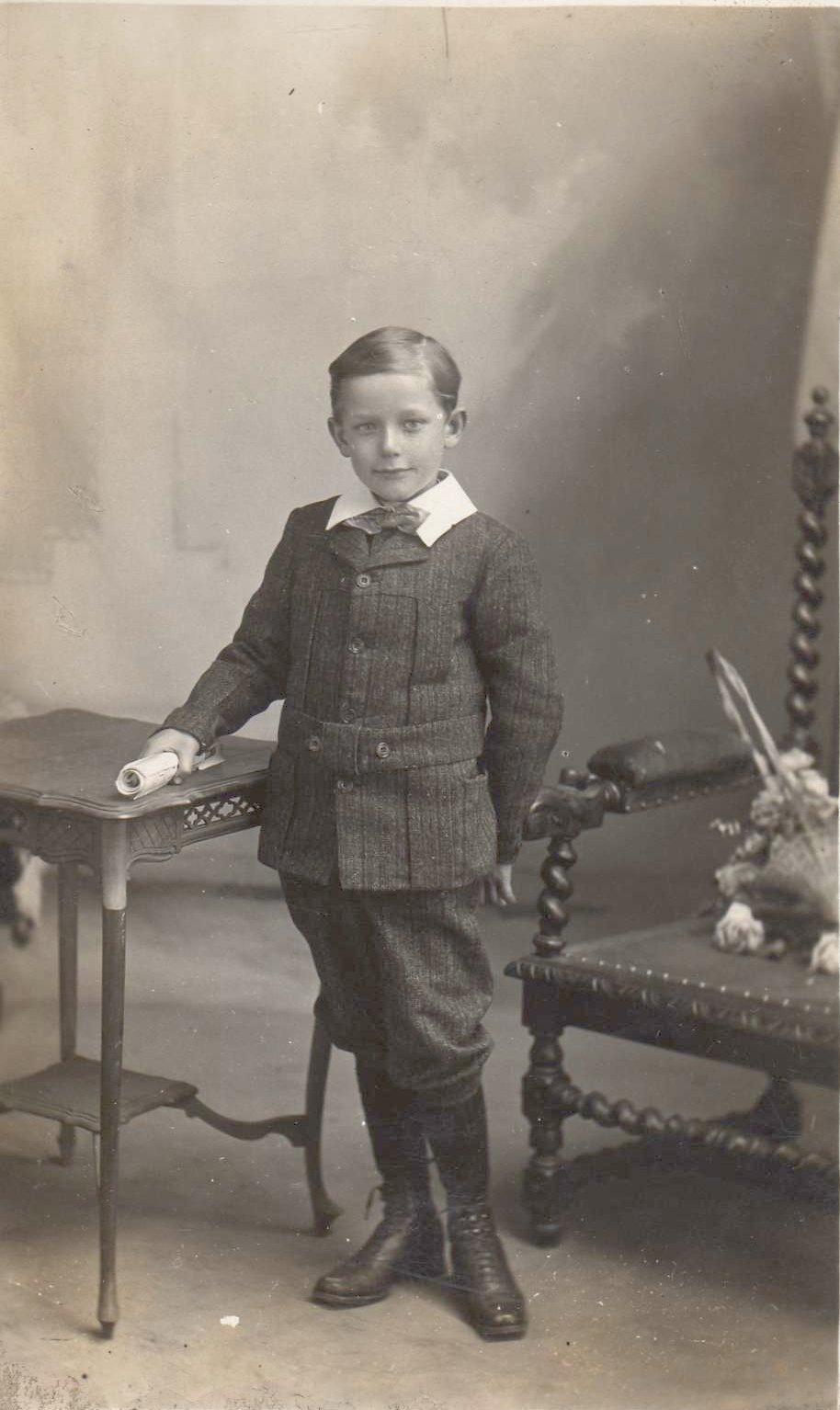 Photographs from Jack Hollands. Click on pictures to enlarge.
For more information about Eleanor Sharpe, see the Sharpe pedigree.

The National Archives hold an attestation of George William Alefounder for Short Service with the East Surrey Regiment dated 27 Nov 1900, he at that time being allowed 107 days towards pay and pension for embodied militia service in the 3rd batallion of that Regiment (23rd June – 26th Nov 1900). He had previously been a carman. He was described as being 19 years 5 months old, 5 feet 5¾ inches, 116 lbs, chest 32–34 inches, of fresh complexion, with hazel eyes, dark brown hair and blue marks on his left forearm.

Some details of his service career are given:

It is clear from his WWI medal card that he he had another period of service in the Army, 1914-15 in France, but the records for this appear to be among those lost during WWII. The note in the records "Discharged. The termination of his first period of engagement" might well mean that he signed on again immediately. He had served 12 years as a private. At the time of his marriage in 1917 he was described as a sergeant in the British Expeditionary Force (Royal Engineers). Afterwards, he became a journeyman compositor, a moulder, and finally a tram conductor.

Charlotte Maxim Alefounder was born before her parents were married, and so her legal surname was that of her mother. However, it is clear that she normally used her father's surname, Maxim. That was the surname that was used at her baptism on 5 November 1871 and she appears with that surname in the 1871, 1881 and 1891 census returns. Her illegitimate children in their turn took their mother's surname. Thus, they were registered using the legal and official surname Alefounder, but often used the surname Maxim.

Image from the British Newspaper Archive, in partnership with the British Library Board, © Successor rightsholder unknown. Click on picture to enlarge. 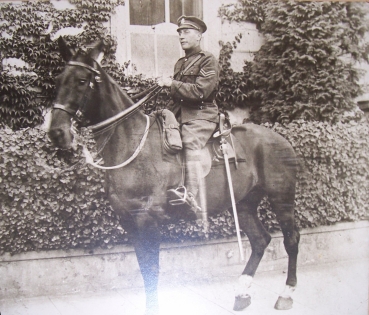 A butcher by the time he joined the Army in 1915 and was posted to the Labour Corps, having served previously in the Territorial forces. He transferred to the Military Mounted Police on 11 May 1919. Among the records of his service is a letter, dated 11 August 1916 from Mrs Pryke, widow, his former employer, complaining that her son could not do all the work required for her butcher's business and clearly wanting her employee back again. It appears from a report in the Suffolk and Essex Free Press dated 31 May 1916 (on the left) that he had already been granted one month at her request. George William Alefounder had other ideas and on 15th September 1919 surrendered his claim to early demobilisation and volunteered to serve until 30th April 1920. He ended his period of service as a Lieutenant Corporal and was finally demobilized on 16th May 1920.

The photograph on the right shows George William Maxim Alefounder in his World War I MMP uniform. He can also be seen in photographs taken at the wedding of his daughter, Ruby Violet Alefounder. 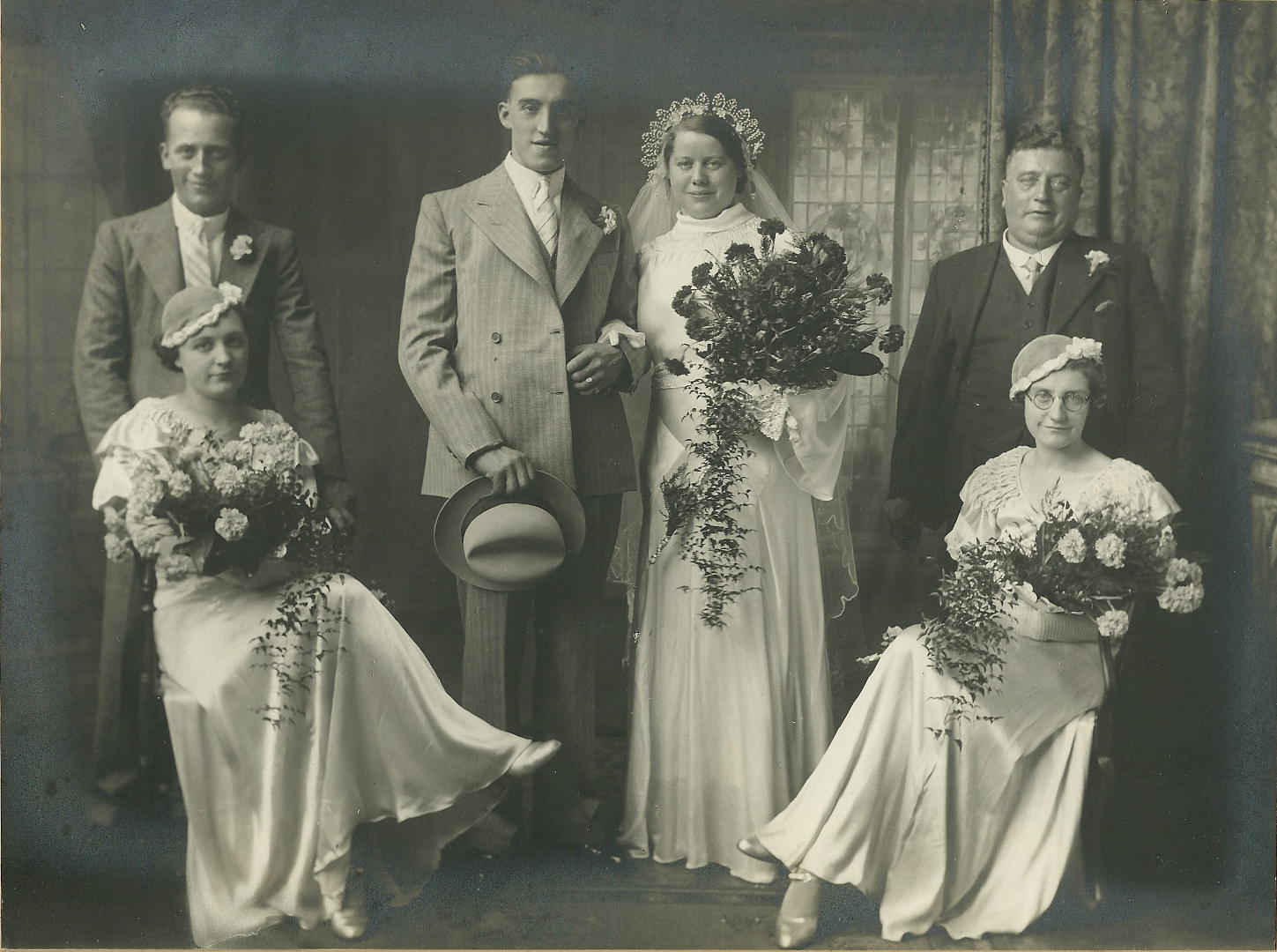 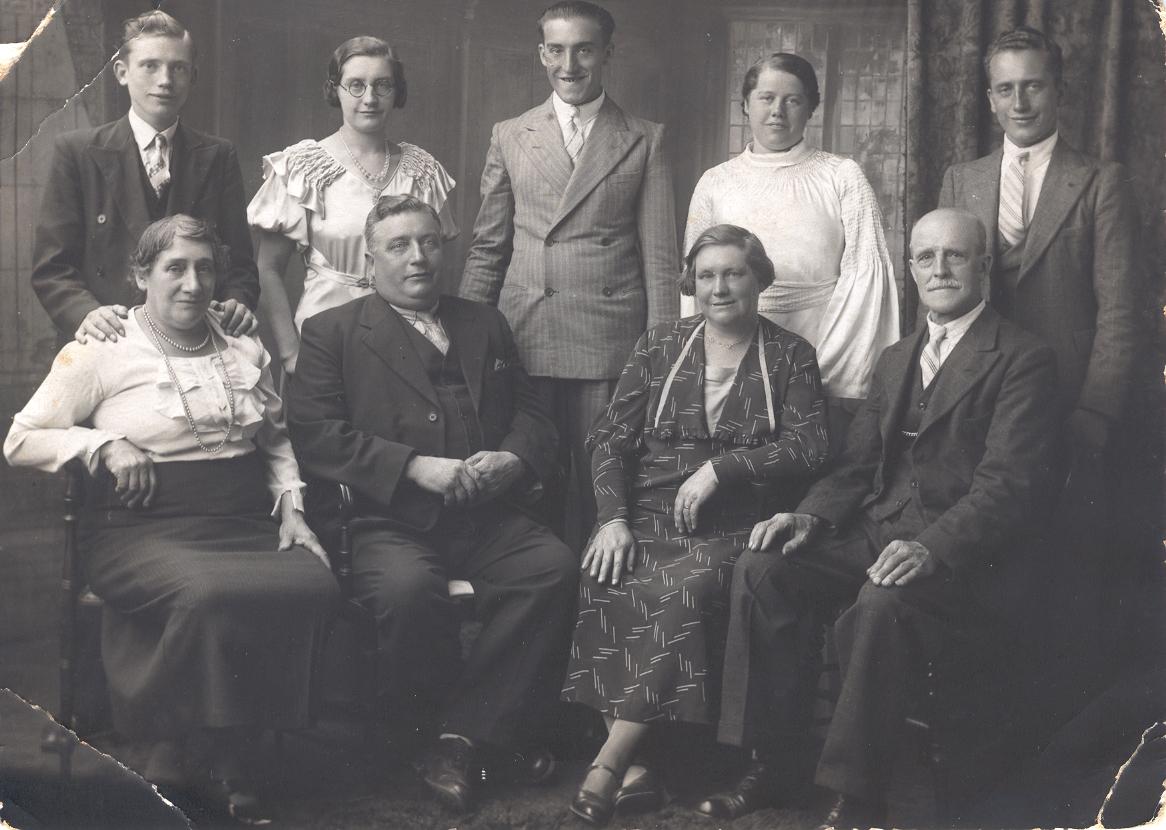 I am grateful to Alexandra Griffiths for pointing out that Ethel Maud could not have been a daughter of Arthur Charles Alefounder, as he had died in 1889. Her birth was registered with the surname Laremore (presumably that of her real father), and she appears in the 1891 census with that surname as a "visitor" with her mother, but by 1901, Mr Laremore having long since departed the scene, she was recorded with the surname Alefounder. She claimed Arthur Alefounder as her father when she married Ernest Howes in 1915. 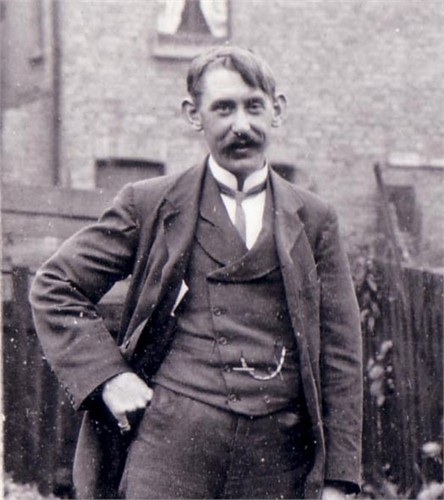 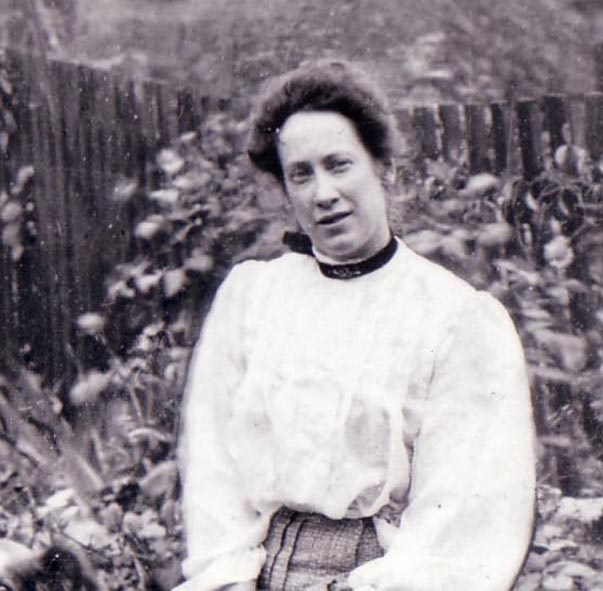 Click on pictures to enlarge. Photographs from Paul Ludlow. 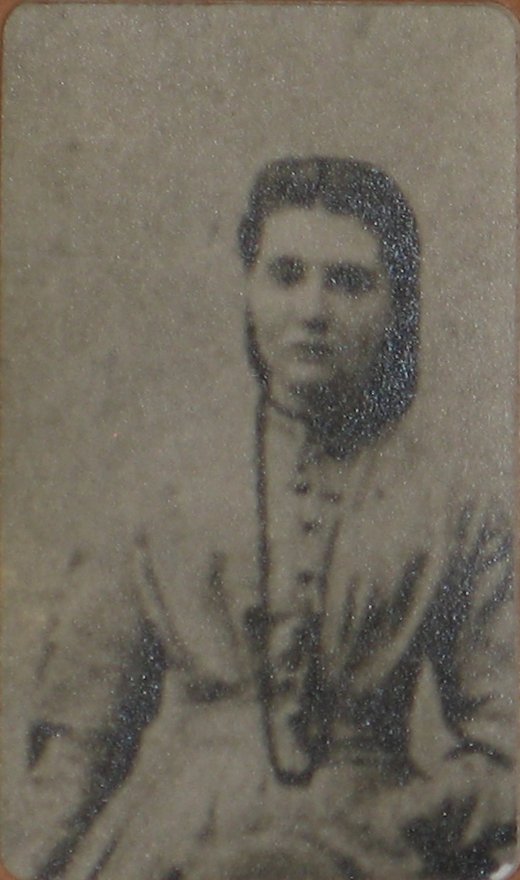 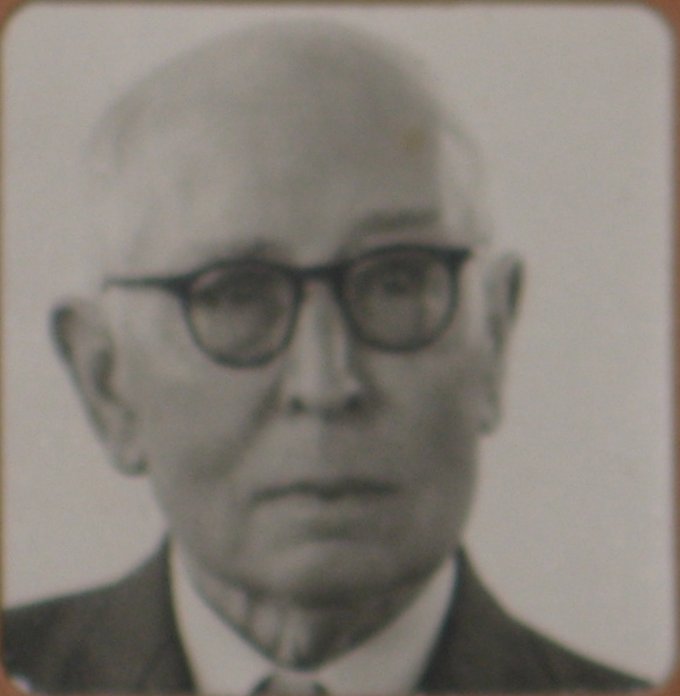 Click on pictures to enlarge. Photographs from Ann Adams.