Thomas Alefounder and his son Thomas produced maps in the second half of the 18th century (Tooley, 1979). Their known works include the following:

Of the maps that I have examined, the finest is the one made in 1776, drawn in black, red and green and decorated with a hand holding a pen above the title. At least some of the others also have shading in coloured ink, but not the 1764 map which was perhaps produced cheaply or free of charge for the vicar of Boxted. 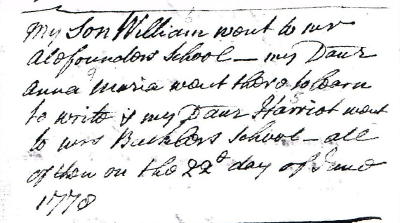 From the diary of Samuel Alston

The main occupation of Thomas Alefounder the elder was schoolmaster, as was suggested by Mason (1990) on the basis that he incorporated drawings of a hand holding a pen as decoration on his maps, this being a device used by writing masters of the time. Samuel Alston, attorney of Nayland, sent two of his children to "Mr Alefounders School" in 1778, as is shown in his diary entry, kindly contributed by his descendant, Edward Fenn, Samuel Alston also appears in the records of the manors of Weeley in connection to land held by Thomas Alefounder and of Langham in connection to Alefounders Wood.

Various manorial (Boxted Hall, Weeley) and other records also confirm that Thomas Alefounder was a schoolmaster. When he married Mary Taylor at St Mary at the Walls in Colchester in 1744 they were both described as "of Boxted" (Essex). It appears that he would already have been in practise just across the river in Nayland, Suffolk; the burial entry in 1791 for his widow in the Nayland parish register states: "Ann Alefounder Wife of Thos Alefounder 50 years school master of Nayland". The family moved there in 1753/4, as can be seen from the places of baptism of their children. Rentals for Nayland show Thomas Alefounder as the occupier (but not the owner) of "a Tenement" in Town Street with "a backhouse" and "piece of ground before the door" between at least the years 1756 and 1772. In 1764-5 he was also the tenant of the market cross in Nayland. Sier (1952) notes that he was the last tenant as the market cross was demolished by the Lord of the Manor and is marked "down" in this entry, but that word was clearly added later. In fact the records show the market cross "with the Chamber over the same" to be still standing in 1768, although just when Thomas Alefounder ceased to be a tenant is not clear. He had left the tenement in Town Street by the time of the 1788 rental.

I can find no evidence that he ever owned property in Nayland, although he appears in a list of freeholders in Essex, compiled from polls of 1767, 1768 and 1774, where he is described as residing in Nayland while owning a freehold in "Wealy" (Clark, 1775).

An advertisement appeared in the Ipswich Journal for 22 Dec 1770:

To be SOLD.
A Freehold Messuage, opposite the Queen's Head in Nayland, in Suffolk, now in the occupation of Thomas Alefounder, School-Master, with the Outhouses, and two Fennages, or Rights of Commonage, in the common Meadows and Fenns in Nayland aforesaid, thereto belonging; also the Manor of Downings, consisting only of Quit-Rents to the amount of one Pound Five Shillings and Eleven Pence a Year.
Also the Fixtures of an Apothecaries Shop, with some Drugs, to be sold very cheap.
Enquire of Mr. Fairclough or of Mr. Alston, both of Nayland aforesaid.

Thomas Alefounder also owned copyhold land in Essex, inherited from his father who died in 1722, soon after his son was born, bequeathing all his land "in Weely and Boxted to such Child as Mary my wife is now bigg with". This land in Boxted and Weeley was first mortgaged and then sold. An advertisement for the land in Boxted appeared in the Ipswich Journal for Saturday 10 May 1783 (no. 2279) p 3 col 3 item 9 (repeated 17th and 24th May):

To be SOLD by AUCTION
By NATHANIEL BARLOW,
At the Red Lion in Colchester, on Monday the 26th day of May inst. between the hours of Three and Five in the Afternoon (unless sooner disposed of by private contract, of which notice will be given in this paper)
A messuage and Eight Acres of Land (more or less) situate in Boxtead in Essex, copyhold of the manor of Boxtead hall, with a right of common on Boxtead heath, now or late in the several occupations of John Appleby, Edward Neverd and William East.
For further particulars apply to Mr. Alefounder of Nayland or to Mr. Sudell of Colchester.

More information on the family of Thomas Alefounder can be found in the Dedham notes.