In the days before photography, many artists painted miniatures. This was the speciality of John Alefounder, probably the most famous member of the family - there is even a short entry for him in the original Dictionary of National Biography, although I believe some of the details given there to be inaccurate. The entry in the modern DNB is much better, although even there reference is made to him having a son, presumably from the inaccurate details of the print Pleasing Intelligence given by O'Donoghue (1908). I have attempted here to bring together all I can find about this artist and to assemble an account of his life and work.

There are a few mistakes which appear in several reference books:

Apart from surviving work listed below and the paintings of unidentified individuals noted in the chronology, a few other works are known. These include:

At least seven examples of John Alefounder's work survive, not including the various etchings which are also mentioned here:

A letter from John Alefounder, writing from India in 1793, to his cousin Philip Havens mentions several of their relations.

Peter the Wild Boy was discovered aged about 12 in 1726 by George I, who was hunting near Hamelin in Hanover. He was brought to England and entrusted to the care of Mrs King who housed a number of pupils of Harrow School, including Sir William Jones. John Alefounder's miniature depicts him at the age of about 73. He was eventually buried at Northchurch, Hertfordshire, the church having a brass plate with a sketch from Bartolozzi's engraving of the miniature (Cotton, 1927). The gravestone, sketch and accompanying inscription may be seen on the St. Mary's Northchurch web site. A print of the engraving was offered for sale, priced at 2s 6d, in Todd's Catalogue for 1794.

The National Portrait Gallery has an engraving of the picture, but without attribution to either artist or engraver. This is indeed Bartolozzi's engraving, as can be seen from the British Museum's version of the image.

Caufield (1820) disputes that the miniature depicts Peter the Wild Boy at all. According to his account, the picture is actually of a Mr. White, a paviour (layer of paving slabs) who "suffered his beard to grow to an immense size" in order to attract fees by sitting for artists wanting to depict unusual characters. "Alefounder, the miniature-painter, has palmed on the public White's portrait for that of Peter the Wild-boy, which is engraved as such by Bartolozzi, though there are not less than three original resemblances of that singular person, preserved by Falconet, Kent, and Drost."

Prints of John Alefounder's painting were offered for sale in the Morning Herald and Daily Advertiser, Tuesday 30 March 1784, issue 1068:

Just published, price 5s a PRINT of
PETER the WILD BOY, as he appeared in the year 1782. Engraved by Mr Bartolozzi, from a picture painted by JOHN ALEFOUNDER.
This extraordinary person was found in the woods near Hanover, and brought to England by King George the First, and was then supposed to be about 11 years old, and he is now living near Berkhampstead, in Herts, upwards of fourscore. He could never be brought to shew any sign of reason or understanding : he is very harmless and inoffensive, and so much pleased and affected by sprightly music, that he will express his pleasure by dancing, tumbling, and many antic gestures. When he was first caught, he had a companion with him seemingly about the same age, who though closely followed by the horsemen, was so swift of foot, as to elude their pursuit and escape, and was never heard of since.
Prints to be had at Mr. Boydell's, Cheapside ; Mr. Ryland's in the Old Bailey ; Mrs. Bull's, Ludgate-hill ; Mr. Dickenson's, Bond-street ; Mr. Bradshaw's, James-street, Covent Garden ; and of Mr. Alefounder, No. 25, Bow-street, Covent-Garden, where the original Picture may be seen.
N.B. Mr Alefounder begs leave to inform the Subscribers that their Prints are ready.

In reviews of a Royal Academy exhibition, the London Courant Westminster Chronicle and Daily Advertiser said, on Wednesday 1 May 1782:

94. Portrait of a young Lady, and Dog. J. Alefounder. Hung near the cieling. God forbid, the Painter should ever be hung so high ; as a reward for works of so much merit.

Mr. Alefounder's Sir Fretful Plagiary, No. 9, and his Edwin in Lingo, promise great things from his pencil in that line

Same newspaper, May 4, in an article headed "The EXHIBITION":

Alefounder's portrait of Parsons, in Sir Fretful Plagiary (No. 9.) is not without resemblance to the countenance of this excellent actor—one obvious defect it has, is an excessive bulk of figure. It is so far no more like, than Parsons is to Hercules.

"The EXHIBITION" on May 11 was less complimentary about Lingo:

No. 82. Alefounder's portrait has not made as much of Lingo as the actor did. Independent of any subtleties of the art, it has not even the humble merit of a correct likeness.

The Morning Post and Daily Advertiser had this to say on Wednesday, 14 May 1784:

REVIEW of the ROYAL ACADEMY EXHIBITION
...
9. Mr. Parsons in Sir Fretful Plagiary, by Alefounder. —This has character, but not that of Mr. Parsons.
...
182. Mr Williamson and Miss M. Stagledoir, as Harlequin and Columbine, in the last scene of Harlequin Junior, by J. Alefounder. It is a very patched piece of business, and as flat as the side of a door.
...
198. Mr. Suet and Mrs Wrighten, as Ralph and Fanny, in the Maid of the Mill, Act II. Scene 19, by J. Alefounder. —This young man is all hand—we would recommend it to him to borrow a head.

MR. ALEFOUNDER begs leave to acquaint those Ladies and Gentlemen whose Pictures he has unfinished, that he will be extremely obliged to them if they will make it convenient to sit as early as possible, as Mr. Alefounder expects to go abroad in the course of a few weeks. 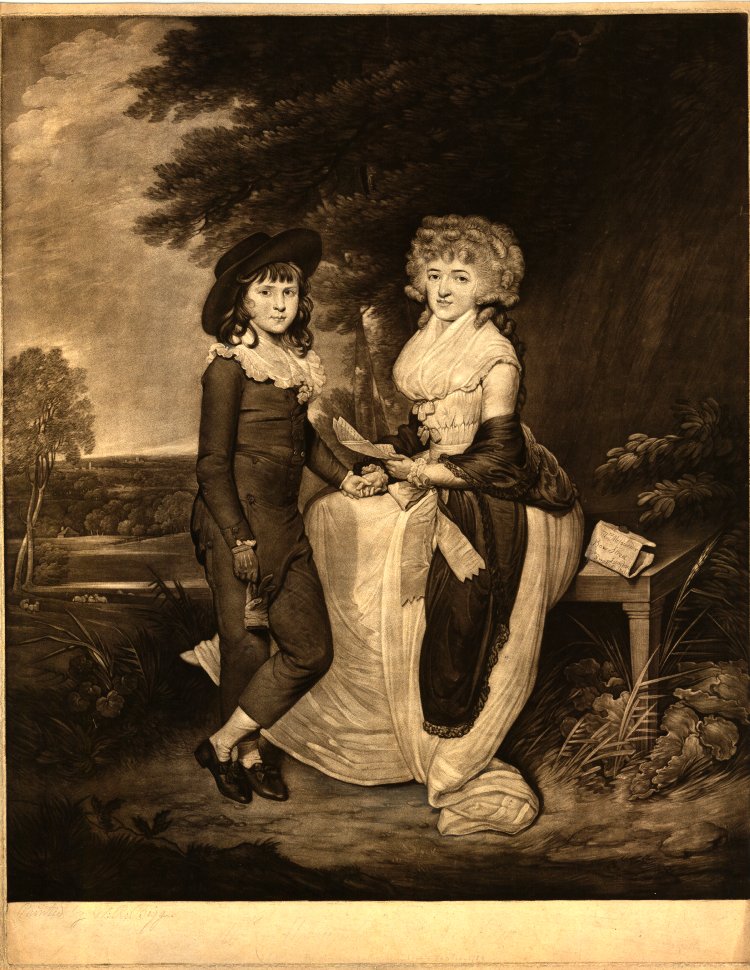 A portrait of Maria Jane Alefounder, the artist's wife, with a child - George Alefounder, a godson of John's brother George and son of his cousin John, and not his own son (O'Donoghue, 1908) or nephew (Smith,1883). This we learn from the will of George's grandmother Alice Alefounder who leaves him, among other items, the Copper Plate Picture of him my said Grandson with his cousin Anna Maria Jane Alefounder as the same Picture is framed and Glazed and called "Pleasing Intelligence". A print of this engraving is in the British Library (O'Donoghue, 1908). The "intelligence" is presumably good news from John, contained in a letter clearly addressed Mrs Alefounder Bow Street London Pr Swallow Packet.

In the London Chronicle for 26th April 1788 p415, can be found a list of "Names of Persons whose Pictures are in the Royal Academy", at the end of an article on the twentieth Exhibition held at that place. Mrs. Alefounder is listed as number 27. There can be little doubt that it is Pleasing Intelligence to which it refers.

Advertisement in the Calcutta Gazette and Oriental Advertiser, quoted by "Calcuttensis" (1882).

Begs leave to inform the Ladies and Gentlemen of the Presidency, that he is perfectly recovered from his late indisposition, and continues to take likenesses as formerly at Mr. George Forbe's, late Colonel Hampton's, Garden, Mirzapore; and any letters addressed to him at Messrs. Forbes & Ullman's in Calcutta, will be punctually attended to.

N.B. - During Mr. Alefounder's illness, his pictures (which were, in general, Portraits of his friends), with his colors, canvas, &c., were all sold, by Mr. Davis's order, at Burrell & Gould's, entirely unknown to him, and without his being once consulted in the business, though at the very time he was perfectly capable of practising his profession. To those Gentlemen who have been so kind as to return him Pictures, Prints, Painting Utensils, &c., Mr Alefounder cannot sufficiently express the gratitude he feels on the occasion.

The Gentleman who is in possession of a large whole-length of a Lady and Child, Mr. Alefounder will esteem it a particular favour to have it returned, as it cannot be interesting where the party is unknown, and from the Lady being a portrait of his wife, who is at present in England.

A miniature Picture of Peter, the Wild Boy, painted from the life in September, 1782; a frame containing five miniatures of his acquaintance in England; a copy from Sir Joshua Reynold's picture of a Lady and Child (Mrs. Hartley), with a number of others in Oil and Miniature; he will be greatly obliged to any Gentleman to consent to favour him with them, as they are of the utmost consequence to him, and will render him the most essential service. If the purchaser of the Match Boy will acquiesce to return it, it will be a most particular favour, as it is a portrait of a very near relation, painted in that character, to whom he is much attached, and a portrait of a child, three-quarters, painted with a balloon hat and white drapery, with a sky background (a show picture). As the quantity of Fitch Pencils were considerable that he brought, if the purchaser will favour him with part of them, they will be gratefully received, as there are none to be met with in Calcutta, and he has not any of them to paint with. Calcutta, September 21st, 1786.

At least some of the missing items were returned. The original of Peter, the Wild Boy and a copy of Reynold's Mrs. Hartley and Child were offered as prizes in the scheme for a raffle in 1788.

In 1787, John Alefounder restored a painting by Zoffany in St. John's Church, identified by Archer (1979) as the Last Supper. This is recorded in the vestry proceedings, quoted by Firminger (1909):

1787, 15th October. - The picture made by Mr. Zoffani and hanging over the Communion Table having been represented by Mr. Alefounder (a painter and friend of Mr. Zoffani) to be damp and in some degree injured, the Churchwardens accepted the proffered services of Mr. Alefounder to have it dried, and this has been done as well as circumstances would admit, as appears from the following letter from Mr. Alefounder:-

SIR, - I have this forenoon aired and cleaned the mildew of the picture with the utmost care and attention. I fear the painting is injured by the mould, as it remains spotty after cleansing it off. The cause I believe to have arisen from a canvas having been fixed behind the picture to preserve the original one, and being oiled after it was nailed on. The damp air remaining between the two must have in some measure occasioned it. I took the liberty of having it un-nailed sufficient to admit a small quantity of air.

Mr. Alefounder attending the Vestry represents that the cloth or canvas put at the back of the picture ought to be removed, that the admission of air may prevent any injury from the dampness of the wall.

Ordered that the cloth be removed from the picture without delay.

Advertisement for a Raffle, 1788

The advertisement as it appeared in the Calcutta Chronicle on August 14th, 1788. It was also printed, without the final paragraph, on July 31st and 7th August.

The following advertisement appeared in the Calcutta Chronicle and General Advertiser, Thursday, October 2, 1788:

An initial advertisement for the scheme appeared on September 11, but did not give details of the third set of paintings.

The Academy for Grown Horsemen

In the Calcutta Chronicle and General Advertiser, 25 September and 2 October, 1788, appeared the following advertisement:

Sir William Jones (1746-1794), known as the father of modern linguistics, was a founder member of the Asiatic Society. He noted the links between Latin, Greek and Sanscrit and was the first to propose the existence of the language now known as Indo-European. John Alefounder etched the Sanscrit for Davis's paper On the Astronomical Computations of the Hindus which was proofread by Sir William Jones and published in the Asiatic Society's journal Asiatic Researches vol. 2 (1790) (Cannon, 1990).